Document Analysis of “A History of Medieval Islam” by J.J. Saunders 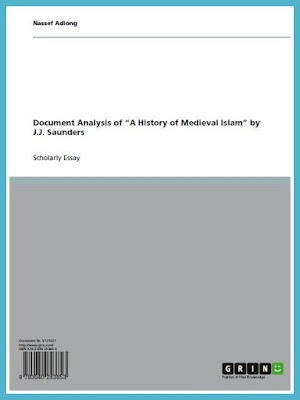 One can crucially think and intellectually assumed that the civilization of the Arabs brought a medieval golden age that unified the whole West and South Asia, Northern Africa, and Southeastern Europe; stretching from Mesopotamia (Iraq), Persia (Iran), Asia Minor (Turkey), Egypt, the Arabian Peninsula, and India to the backdoors of the European continent (Spain) – was a product of the propagation of one powerful ideology, which is Islam.

In the book written by J.J. Saunders, a historian of middle age Islam, poignantly narrated the Islamic and Arab historiography in his book published in 1965 entitled “A History of Medieval Islam,” which have explicitly expressed a well-crafted academic research work during the medieval society of West Asia and the political interventions of different empires who have had occupied the whole boundless yet fragile region.

The proponent will succinctly try to examine this hypothesis, whether an indispensable Islam have unified half of the world through an inconsequential Arab civilization and factors that brought occupations into reality. The document in the last chapter, “The Civilization of Medieval Islam” will be the subject to a critical analysis.

Posted by Nassef Manabilang Adiong at 3:47 AM