After being an excellent International Studies scholar, UE College of Arts and Sciences-Manila graduate Nassef Manabilang Adiong is making waves internationally as a postgraduate student enjoying multiple scholarships and as an author of several published academic papers.
He is currently a Doctor of Philosophy candidate in International Relations at the Middle East Technical University in Turkey, and is a recipient of both the European Union’s Erasmus Mundus Mobility with Asia Scholarship and the Turkish Government’s TÜBITAK Fellowship for foreign Ph.D. students. (TÜBITAK refers to the Scientific and Technological Research Council of Turkey.)
He received an “Outstanding Academic Performance Award” from the Dean of the Graduate School of Social Sciences and the President of the University. He received the award after fulfilling all the required courses in only two semesters with a high cumulative grade point average of 3.86 out of 4.00, and passing the comprehensive examinations. In addition, he was also awarded the 2011 Korean Government Scholarship Program as Ph.D. student in International Politics, Major in Middle Eastern studies (his second Ph.D. program) at the Hankuk University of Foreign Studies in the Republic of Korea, but he declined it. He is now considering a PhD fellowship from Berlin Graduate School of Muslim Cultures and Societies in 2012.
Mr. Adiong graduated from the UE CAS Manila with the degree of Bachelor of Arts, Major in International Studies, Magna Cum Laude, in November 2006. He completed the entire degree program in three and one half years.
As a UE student, he was a grantee of the Quezon City Local Government Scholarship Program and was a two-time Academic Excellence Awardee. He also served as Vice President of the CAS Manila Student Council in school year 2005-2006, and participated in many contests and conferences in UE and off-campus. He was a University President Scholar (2nd Semester, SY ’04-05), a University Scholar (SY ’05-06 and in the 1st Semester of SY ’06-07) and a College Scholar (1st Semester, SY ’04-05).
Mr. Adiong went on to receive his Master in International Studies at the University of the Philippines-Diliman in 2009, studying through both a UP Presidential Scholarship and a Willy Keng Fellowship. UP also awarded him with a ‘merit certificate’: twice as a distinguished College Scholar and once as a distinguished University Scholar. 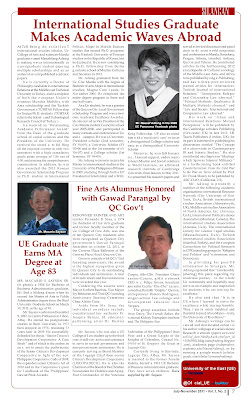 Moreover, he won full bursary (i.e., financial support, endowment) to learn Muslim and Jewish relations at Woolf Institute, an affiliated research institute of Cambridge University, from January to May 2011. He presented his research papers and served as invited discussant and panel chair in different world congresses and conferences in Manila, Barcelona, Prague, Athens, Istanbul, Ankara, Qazvin and Tehran. He contributed articles to the forthcoming 2012 Encyclopedia of Cultural Sociology of the Middle East, Asia, and Africa to be published by SAGE Publishing, and has written peer-reviewed journal articles for “Alternatives: Turkish Journal of International Relations,” “Immigration, Refugee and Citizenship Law eJournal,” “Political Methods: Qualitative & Multiple Methods eJournal,” and “Law and Society: International and Comparative Law eJournal.”
His work on “Islam and International Relations: Mutual Perceptions” will be published by the Cambridge Scholars Publishing (Newcastle, UK) in late 2012. I.B. Tauris Publishers (London, UK), for its part, is interested in publishing his dissertation entitled “The Concept of Nation-State in Contemporary IR and Islamic Studies.” He also contributed one chapter on “Ideology which Spawns Islamist Militancy” in a forthcoming book entitled Counterterrorism: From the Cold War to the War on Terror edited by Prof. Dr. Frank Shanty to be published by ABC-CLIO (California, US).
Mr. Adiong is presently a member of the following academic organizations: International Resource Network (City University of New York, USA), British International Studies Association (Aberystwyth, UK), Middle East Studies Association of North America, Inc. (Arizona, USA), International Political Science Association (Montreal, Canada), The International Studies Association (Arizona, USA), The International Society for Islamic Legal Studies (Massachusetts, USA), Turkish International Studies Association (Istanbul, Turkey), and the European Consortium for Political Research (ECPR) standing groups in ‘Religion and Politics’ and ‘Extremism and Democracy.
In providing his post-UE information to Silangan, Mr. Adiong expressed that “I am humbly [sharing] this piece regarding my academia journey…to the whole UE community and hopefully may serve as an example and inspiration for students who are striving for excellence.”
He also said that “[I]t is in UE where [I] learned to strive for excellence while staying humble. Thus, [I am] infinitely indebted and thankful to [my] Alma Mater—truly, the University of Excellence!”
Mr. Adiong’s writings can be viewed and downloaded online via his author webpage at Social Science Research Network (papers.ssrn.com/sol3/cf_dev/AbsByAuth.cfm?per_id=1556958), blog (nassef-adiong.blogspot.com), academia page (independent.academia.edu/NassefAdiong), or by running a Google search (scholar.google.com/scholar?q=nassef+adiong).
Posted by Nassef Manabilang Adiong at 8:01 AM