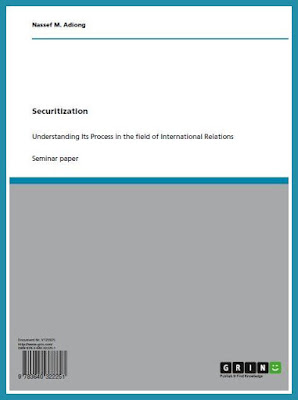 In its broadest and academic term, “security” has been defined contemporarily by Buzan and Wæver (1998) as being that special type of politics in which specified developments are socially constructed threats, having an existential quality to cover values and/or assets of human collectivities and leading to a call for emergency measures.

However, surveying the old traditional perceptions of security dating back from Plato, Aristotle, , to Rousseau, Kant, Kautilya, to Hobbes, Machiavelli and to Morgenthau, I found out a linkage of a security study in answering human’s physiological needs that is interpreted in varied disciplines from Philosophy, Political Science to International Relations.

Their arguments were presented in the study done by Solidum et al (1991, p. 13-16), to Plato such path leading to security was presented in his ideal republic. The total security, both spiritual and material, was brought about the creation of a new society and all its institutions based on the right principles of social existence. Plato related these principles to the idea of the universal Good as governing nature.

For Aristotle the quest for security was connected with his idea of fullness of being and ideal nature. This took the form of instinctive striving after perfection as embodied in the species. In the area of man’s social or political life, security arrangements manifested themselves in certain types of social systems said to be harmony with nature or in conformity with man’s striving after full development of himself or the Good’s life. For security was associated with commitments to certain universal principles of conduct. The ultimate aim was to bring about a condition of universal social harmony and stability. Goodness of human nature was often assumed which, if damaged, could be restored mainly by proper education.


Posted by Nassef Manabilang Adiong at 10:45 AM